Biologist by training and entrepreneur by spirit, Maoi Arroyo aspires to build a strong biotechnology ecosystem in the Philippines. AsianScientist (Jul. 31, 2020) – Ask a child to picture a scientist and they’ll probably imagine someone in a white lab coat, peering down a microscope or at a rack of test tubes. However, that’s only half the picture. More and more scientists are taking steps beyond the lab, commercializing their research to pioneer new industries and impact lives at the same time.

But how exactly do you go from the lab to the real world? That was the question on Maoi Arroyo’s mind when she founded Hybridigm, the first biotechnology consulting firm in the Philippines. Hybridigm works as a match-making platform, connecting scientists and their disruptive biotechnologies with entrepreneurs or businesses, and as a training service.

To date, the firm has trained over 17,000 researchers and entrepreneurs from the best universities in the Philippines, translating into jobs and wealth for the country’s most under-privileged communities. Hybridigm has also partnered with the Philippine government to develop the Technology Transfer Act of 2009 that has since facilitated US$3.5 million in biotech investments.

In 2018, Arroyo founded the Ignite Impact Fund, a fund focused on eradicating income and access poverty in the Philippines by investing in socially impactful startups. The fund’s philosophy centres around supporting inclusive and sustainable business models that benefit the poorest.

Arroyo’s achievements have earned her a place on the global spotlight. In 2020, she was the only Philippines representative at the World Economic Forum in Davos. Sitting down with Asian Scientist Magazine, Arroyo recounts her journey and motivations in strengthening biotechnology entrepreneurship in the Philippines.

It was partially necessity and partially a great dream of mine. I wanted to really understand the natural world, but at the same time I realized during college that I was tired of innovations just getting stuck in bound theses found in university libraries. I wanted to actually help the Filipino people, because I feel like when you do, you help the world. After I graduated, I realized I just didn’t have it in me to be around test tubes for the rest of my life.

The most important thing that we did was that we helped build an enabling environment for life science-based startups to flourish. We helped write the Tech Transfer Act of 2009, which allowed Filipino scientists from state universities to commercialize. It brought a lot of visibility to existing life science-based businesses, and it gave students in the life sciences an alternate career path aside from just medicine.

I’m also very proud of building an ecosystem consisting of the people we trained at Hybridigm. We’ve seen our people move on to working in policy, in big corporate settings, and become entrepreneurs of their own.

Interest in medical biotechnology ebbs and flows. As soon as the emergency is over, human beings tend to forget about it. But it’s always a good idea to invest in vaccines.

If you look at what makes our communities more resilient in a crisis, it’s preventive healthcare. What kind of innovations can we make such that people don’t have to go to the hospital? On the industrial side, wouldn’t it be great if you could have biomaterials that repel viruses? Or a biosensor that lights up if something is covered in bacteria?

I think by harnessing our biodiversity properly, we can be more resilient. You can make graphene—which goes for $200 per gram—from coconut shells, benefitting the poorest coconut farmers who live on a $1 a day.

To illustrate, we can invest in processing to get higher value ingredients, like glycerol from coconut oil and bio-ethanol from our algae. I think it’s really just a matter of having people with patient capital and the vision to see it through. That’s partially why I started Ignite Impact Fund and work as its principal.


The biggest problem is philosophy. Filipinos need to invest more in the Philippines. I’m talking about investing in smallholder farmers, or really unsexy things like rice mills.

We need to be making investments in key life science-based startups. I actually believe that investing in innovative startups in the Philippines will prove that investing in the Philippines is a good idea not just to foreign investors but to ourselves. Lots of people say the grass is greener elsewhere and you migrate because that’s where the jobs are, but I think the grass is greener where you water it.

Innovation is about trying to make a difference. If you want to change the world, science cannot stay within the confines of the ivory towers of universities. Maybe you won’t win a Nobel Prize, but you will taste what it is to make a difference, a tangible, measurable impact in your country and in other people’s lives.

This article is from a monthly series called Asia’s Scientific Trailblazers. Click here to read other articles in the series.

Copyright: Asian Scientist Magazine; Photo: Maoi Arroyo.
Disclaimer: This article does not necessarily reflect the views of AsianScientist or its staff. 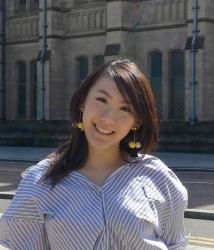 Jacklin has recently graduated with a Masters in physics at the University of Manchester. With a life-long passion for writing and science communication, she's now interning with Asian Scientist Magazine. Jacklin plans to pursue science journalism as her future career.

Jacklin has recently graduated with a Masters in physics at the University of Manchester. With a life-long passion for writing and science communication, she's now interning with Asian Scientist Magazine. Jacklin plans to pursue science journalism as her future career.